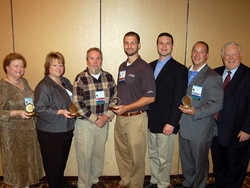 Today, the Pike’s Peak Awards were presented to four organizations which have demonstrated wholehearted implementation of participant-centered techniques in their training.

Andres Gonzalez and Christopher Walker represented Covidien Surgical Devices Sales Training. In the past, the nine-week sales training was long and exhausting for both participants and trainers. After completing Bob Pike’s Boot Camp one week, the trainers began implementing the techniques for the soft tissues training which began the next Monday. “The first class where the Bob Pike Philosophy was implemented [had] mixed success,” said their nomination letter. “The comment made was that too many of the tools were implemented…We have now had the chance to review, revise and retry with the last seven classes. The results have been outstanding.”

Covidien has a policy which says if a trainee doesn’t gain mastery, after a few strikes, they are let go from the company. “Our termination rate since implementing the changes has reduced from 13 percent down to 4 percent” said Covidien’s nomination letter. The changes also resulted in more consistent evaluations during the entire training instead of high reviews the first two weeks when it was fresh and new, low marks during the center when things were getting more stressful, and high marks toward the end as trainees looked forward to completing the training.

Pennie Morgan represented Central Community College, a three-location college system in Nebraska. CCC has been using BPG methodologies for years and some of their corporate partners wanted to know how they did it. So CCC partnered with Becton-Dickinson, maker of pharmaceutical supplies, to bring in The Bob Pike Group to do two in-house workshops. As a result, Becton-Dickinson has used the instructor’s guide to pass on training know-how to new trainees, retaining information from employees that have retired. They also are working on a global template for training design for all of their plants internationally.

CCC’s executive vice president has supported these changes. At a mandatory CCC in-service next month, Morgan’s department will be presenting some of these participant-centered techniques at a concurrent session to members of faculty and staff as part of the professional development track.

Jeanie Filter, CPLP, represented the trainers at the State of Arkansas Department of Finance and Administration. Since being exposed to participant-centered training, her department has rallied together to make drastic changes in how the department trains and has pushed for changes to the training facility. The group now has a training lab, complete with special desks where the monitor flips up when the keyboard comes out…which means the monitor can be hidden to do flipchart work or other table activities. The training tables are also on coasters so they can be easily moved into different formations. The size of the available training space has also multiplied—which is no small feat when working with government budgets.

The fourth award was given to AGCO Corporation and represented by Edmund Byne, training coordinator for the farm equipment manufacturer. Instead of dry explanations of different parts, one of their trainers created a human transmission, utilizing participants to represent the different parts. Feedback has been really positive from everyone, especially the dealers they work with, Byne said.

The Pike’s Peak Awards are presented at the annual Bob Pike Group conference to organizations and individuals who have shown a commitment to implementing participant-centered techniques.