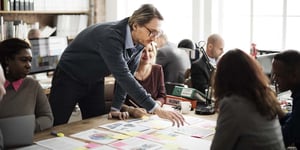 The amount of team-based work has increased in most offices, but with the pace of today’s economy, teams often don’t have adequate time to experiment, regroup, and improve their operations. According to research by Training magazine, only 50% of Millennial workers report that their teams perform at an optimal level at least half the time. L&D professionals are observing that there are gaps between expected and actual team performance. And they’re starting to unpack why that is and how to address it.Team-based projects aren’t going anywhere, so it’s up training professionals to explore ways to close these gaps in performance. The good news is that there’s a strong correlation between a team’s performance and the amount of training they’ve received.

Training magazine’s survey found that highest-performing teams were those that received the greatest overall levels of training for both team members and team leaders. The difference is dramatic: 62% of top performing teams reported that their organization provides a lot of support, which is 33% more than the overall average of 29%.

For organizations looking to increase the amount of teamwork in the workplace or improve the performance of existing teams, the key is not to overestimate the strength of their teams. No matter how good your people are, training for both team leaders and team members is essential to achieve the highest standard of team performance.

Dr. Eunice Parisi-Carew, founding partner of The Ken Blanchard Companies, with whom Training magazine partnered to conduct this research, has identified seven key areas of improvement that leaders and L&D professionals should explore when trying to improve team performance.

The 7 Components of Team Performance

Start looking into the conditions of teamwork in your organizations and identify areas for improvement. From there, you can develop a strategy to enhance team performance through team training.