He Said, She Said: Communicating Between Genders at Work 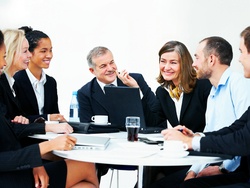 At work, men and women use strategies in communicating with each other that the opposite sex may view negatively. Often, misunderstandings can be avoided when coworkers look beyond personalities and consider the different ways men and women communicate.

Let’s look at a few examples from both sides.

Trash Talk. Men use negative banter, joking, teasing, and playful putdowns as a way to subtly keep themselves at the top of the power hierarchy. Such “trash talking” is a common component of male relating.

What women think: Making others feel small is decidedly not a female trait. Women tend to see putdowns as arrogant or hostile.

The middle ground: In general, trash talk is usually harmless, as long as both parties “play.” When both parties engage in it, it can even be a way to bond around a problem, such as a trying work assignment or demanding sales quotas.

Prideful self-sufficiency. You’ve heard the jokes about men not asking for directions? In work settings, males sometimes ask few questions, fearing that doing so will communicate to others that they don’t know something. Males tend to equate knowledge with power and don’t want to diminish their image by showing they lack the necessary know-how.

What women think: Women see this behavior as childish and even arrogant. They also look at it as a giant waste of time, figuring it is more time effective to ask a question, get the answer, and move on.

The middle ground: Some workplace cultures discourage questions, and indeed make people feel self-conscious about asking too many. In meetings or other settings where everyone needs to be on the same page in order to develop the best strategy, both genders need to find ways to get and give clarification.

Not Giving Feedback. Because men don’t solicit feedback, good or bad, they also don’t give feedback in return. Males don’t want to be criticized, feel that compliments make someone less effective, and think women who seek feedback are “needy” and “high maintenance.”

What women think: Women think men don’t value their contributions, and are overly critical. They may even feel that men withhold positive feedback in order to avoid giving women promotions or good projects.

The middle ground: Constructive feedback should be built into the workplace culture. Both genders need to find a way to make it a tool for improving performance and productivity.

Equality-minded. Women try to maintain an appearance of equality amongst everyone. They are concerned with the effect of the exchange on the other person, and want to make sure everyone feels like a worthy contributor.

What men think: Men tend to see this as a sign that women lack confidence and competence as leaders. They feel it makes women look weak.

The middle ground: Females can wield an enormous amount of power by orchestrating collaboration and enlisting the cooperation between many parties. Men can learn from this. Nevertheless, women in leadership positions need to maintain a clear boundary between their authority and that of others.

Outside-In Negotiating. Females want to see the full picture and make sure everyone’s on the same page with the same level of understanding before making a decision.

What men think: Since this is the exact opposite of what men typically do, men think this tactic means women don’t have a clear position or aren’t decisive enough.

The middle ground: In negotiations, it’s imperative to know all the factors involved before making a decision. On the other hand, trying to make everyone happy is not how leaders make good decisions. A balanced blend of female thoroughness and male decisiveness is ideal.

Likely to Downplay Certainty. Women don’t want to appear pushy or uncaring of others’ positions or ideas.

What men think: Men think, therefore, that women aren’t certain and need someone to take charge.

The middle ground: Moderate self-deprecation and humility are good qualities in leaders. But always deferring to others’ opinions and perspectives will be perceived as a sign of weakness. Find a middle way.

When it comes to communicating between genders in the workplace, the cardinal rule is this: Don’t judge. Instead, try to look carefully at your coworker’s behavior, consider that some of it may be gender based, and try to gain insight on how this behavior serves or does not serve his or her objectives. If you want to step in and give support, do it from a position of understanding.

Beth Banks Cohn Ph.D. is a leading expert in change management and leadership development. Roz Usheroff is an internationally recognized communication expert and personal branding executive coach. They are coauthors of the new book, Taking the Leap: Managing Your Career in Turbulent Times. Their websites are www.banksconsulting.net and www.usheroff.com.